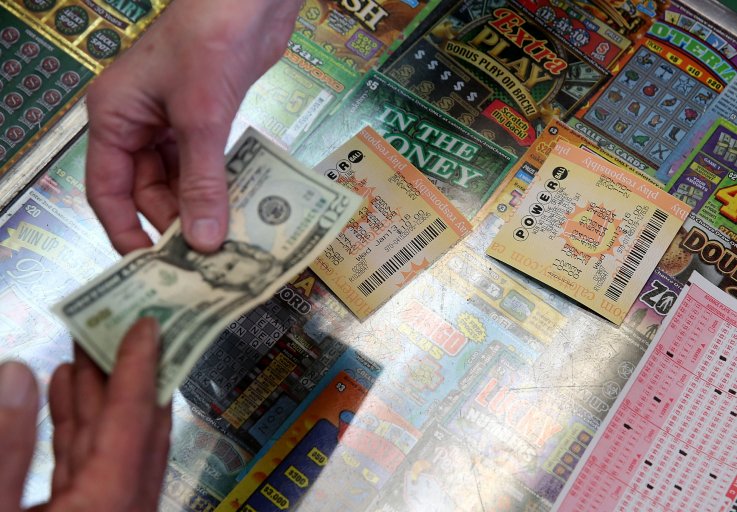 A person buys Powerball tickets at Kavanagh Liquors in San Lorenzo, California. A large number of people lined up Kavanagh Liquors, an outlet which has had several multi-billion dollar winners.

A California resident has won $10 million on a $30 scratcher. Karpis Kasabian purchased the Ultimate Millions scratcher, which is one of the most expensive scratchers with the largest prize potential in the California lottery.

The $10 million prize is going to be paid out as an annuity, which consists of an initial payment followed by 29 annual graduated payments. After 30 years, Kasabian will have been paid out the full $10 million.

The Ultimate Millions scratcher also offers prizes of $2 million and $5 million, also compensated as annuities. The chances of winning one of the grand prizes are one in six million.

Another top prize scratcher, the Bankroll, also costs $30 and it has a payout of $10 million. Three of the four top prizes have been won; one Bankroll grand prize of $10 million remains unclaimed.

Another California resident also got lucky with the lottery and won $1 million on the $10 scratcher. Joel Choe purchased a Seasons Greetings ticket at Victoria Plaza Liquor in La. The shop will get a $5,000 bonus for selling the winning ticket.

“It just means better days,” Choe said. “I want to hang back for a little bit and take some time before deciding what to do next.”

The California lottery presently has greater than 50 scratcher games on purchase, with top prizes varying from $500 to $10 million.

If a player does not win a prize on the scratcher, they still are able to win something later on. The California lottery includes a secondary game called Scratchers Second Chance, where players can enter their losing scratchers into a draw after sales for that scratcher are closed.

Every $1 allocated to a losing lottery ticket means one entry into a weekly prize drawing of $25,000. That means that if a player purchases an Ultimate Millions scratcher for $30 but does not win anything, they still get 30 entries into the 2nd chance the prize draw.

To enter the 2nd chance draw, players must register through the California lottery and enter the second chance code located on the scratcher ticket.